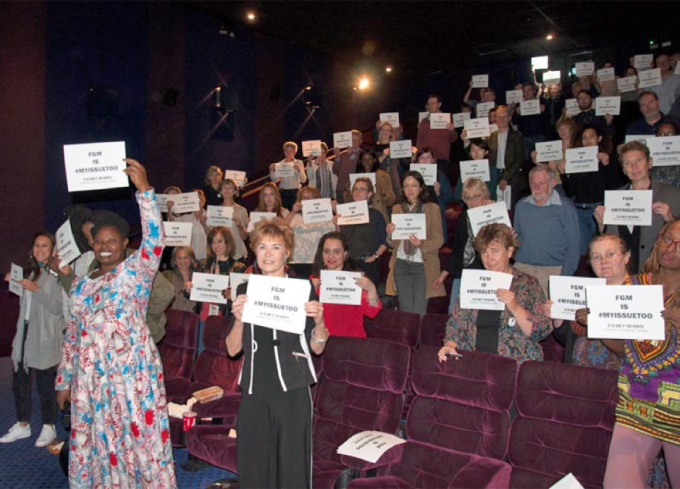 Rhobi’s Global Mission: ‘In The Name of Your Daughter’ UK Film Premiere

Rhobi Samwelly has been spreading the word globally of her fight against FGM. Starting in the General Assembly in New York, the next leg of her journey took her to London, to the UK premiere of In the Name of Your Daughter. The documentary, directed by Canadian Giselle Portenier, follows Rhobi’s active fight against FGM in rural Tanzania and was a highlight of London’s Raindance Film Festival – Britain’s largest independent film festival.

The film, which highlights stories of individuals who have found shelter in Rhobi’s safe house, underscores the life-saving impact of Rhobi’s work. One of the central stories is about young Rosie Makore, who at 11 years old, has to decide to submit to cutting and child marriage or run away from everything and everyone she knows. Rhobi’s safe house gives girls a place of peace where they are accepted and protected. Additionally, the film presents how FGM in Mara is intricately weaved into the local cow-based economy and the view of women in society, with husbands claiming that cutting will reduce a women’s tendency to be unfaithful.

After the showings, Q&A’s were held with Rhobi and filmmaker Gisele Portenier. The audience, noticeably moved and affected by the film, was desperate to know how they could help Rhobi in her fight. You can do so by donating through our Girl’s Rights Fund page on MyDonate: https://mydonate.bt.com/events/nofgmtanz/4. Important: please mark your donation ‘For Rhobi’ in the comments box.

More economically conscious minded audience members asked how Rhobi expected those benefitting from FGM practices i.e. ceremony organises, cutters, to accept their incomes being tightened. The conclusion pointed to a need for the government to intervene in the form of grants to wipe out the illegal practice in its entirety.

No one who watched this film could avoid being deeply moved by the fear of girls facing FGM, unable to trust those who should be caring for them. Equally, however, all were uplifted by the spirit of the girls and their determination to realise their dreams. By the end, the audience was enthused by Rhobi’s fights and joined in with a group photo, declaring that FGM is #MYISSUETOO.

View all posts by VashtS